1993 it was love at first sight for me.Cast differences,immaturity on my behalf,just left convent school and felt like a free bird in a coed college.Met my now husband through a common friend and then all that followed was one perfect being deeply in love with a surprised bipolar personality( that’s me).We continued our true love for three long beautiful years convincing and trying to elope if given a deaf ear.Out love was pure and so in 1996 we got traditionally married and became man and woman.Was beautiful for the first year as we created our bundle of joy,our daughter in 1997.Yes those days people were not so career oriented and though both our family’s were not very well to do we all had one thing in common “love and unity”.Postpartum depression hit my already existing bipolar.Needless to explain the pain,sufferings and helplessness in the whole family.Things got a little settled inside me due to the 6 shock treatments that were prescribed by my physiatrist.I was 23 then,when the urge to make my family complete started bothering only me.My hubby and our whole family was against it as they were told another delivery would make me land into an asylum!!!

It was my deep desire and strong faith in GOD that I delivered a pre-matured baby boy in the seventh month.Weak and tiny was our son due to the heavy medications I had taken.He was born at 1:04 and for three minutes the doctors and me didn’t hear his crying.Thanks to science they injected him and got him into this world.It was my faith in GOD and I knew it.When he was 24 days old he had already been pricked 19 times due to his two repeated febrile seizures.Looking at his pain made me forget my own bipolar pain.His first word was out when he was 4.Speech therapy and again my faith in GOD made our son the most cleverest handsome hunk.My bipolar was a member too while both our kids were growing.

Today we are proud parents of a beautiful 16 year old daughter and a normal speaking 13 year old taller than his own parents son!!! When I look back into our family history,I have just a few regrets about some of our family members taking their voyage to heaven and a little regrets for our family’s helplessness.All this only strengthens my faith in him and I know deep beneath bad times are over!!! 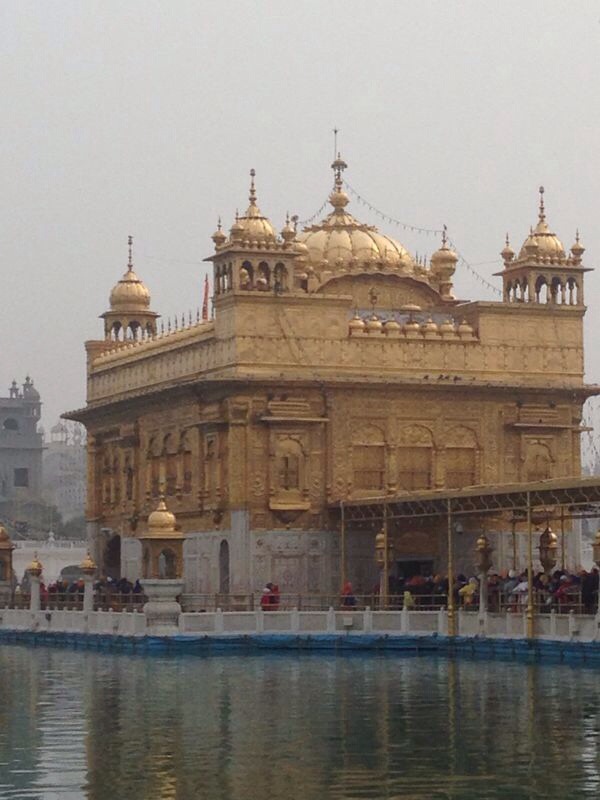 The craving of seeing the golden temple (Gurudwara) as we call it in India had been there in me ever since I got married in 1996.Almost everyone in my family had some time visited Amritsar.Had heard about its beauty and bliss all the time but my eyes yet had to capture the sight.On our 18 anniversary knowing my inner long awaited wish my husband surprised me by announcing two days prior that we would be present on our anniversary at the golden temple.It made me happy beyond words could express.As I had heard so much about it over the years,on reaching there I felt speechless and enjoyed every moment as I was granted my wish and my husband was along with me.The temples atmosphere inside is so magical and serene it makes you forget any grief or pain that exists. The people inside are so helpful and smiling, I didn’t mind enhancing my knowledge about their religious practice from a stranger.One has to cover their head totally before entering the temple,removing their footwear and giving it to volunteers who opt for doing that service ( called SEVA in India) .There are taps installed so the people can wash their legs before entering the temple.The kitchen is so large and the vessels made me wonder about the amount of strength one requires to stir while cooking.Anyone who would like to volunteer for help is welcome with open arms by the kitchen as every lunch and dinner is served to people who like eating in the temple( it is called LANGAR in India) My personal view about the taste of the food cooked is beyond comparison to any five star hotel food.We both were excited to see the temple in the night time.

The night view was enticing and illuming.Was difficult to come to a conclusion of comparison.Was once again speechless and just wanted to sit there for hours together and capture the beauty and admire the thoughts of man describing his love for GOD!

We were fortunate in gaining a VIP pass for entering the ceremony of the flags hoisting which is a daily routine on the border by a dear college friend.Was quiet a heart palpating moment for us to see the parade and the expressions the soldiers had while performing it.The huge crowd on our side was equal on the other side of the gate.The almost 45 minutes ceremony was indeed breath taking.There was no other feelings than that of patriotism I could feel in and around me.My personal opinion that I derived after the whole ceremony was over was “Peace is possible,Wars kill”.

I am not Shakespeare but a big fan of his words!! Neither have I totally succeeded in implanting all his sayings into my world,but I am a firm believer in trying and I believe a particular time is planned for each one of us to receive our well deserved solace for which our efforts felt like eternity.I am 38 today and don’t have much repent when I look back.My illness was off course a part of me, but today I feel,the almighty could not have given me everything ready on a platter.I use to at times question him as to why me? What had I done so wrong that you make me suffer so much? He was as for everyone silent to my pleas.Most of my life I thought I loved people and could say and do anything and everything as I thought they loved me back too.Today I see it totally differently.I feel it was only their love for me that made them dance to my tunes as they only knew to give and my love was only a stubborn demand into forcing them to do what they did for me.

Like the saying goes its “never to late”!! I’m happy and extremely thankful for what GOD had planned for me.I am grateful and feel blessed he made me see things which now give peace to my inner me.As I feel contented inside I try as much as possible not to “EXPECT” from anyone as I love surprises.Silence has the power to get you what you desire.

During the worst 13 years that I suffered with my bp2,I with hurting my loved ones mentally also hurt myself physically multiple times.The reason was clear,I wanted to gain sympathy and attention from them and in a way wanted to confuse them to rethink their stern decisions they had planned for me,a rehab. Due to the illness I use to become a monster and do wicked things during my rage, by crossing the zenith of humanity.By the time the medicines could penetrate and supplement my chemical imbalance,I use to undergo fear and guilt for what I had caused.That allowed me to punish my own self,and the sight of red gave me pleasure.I remember so clearly the mess my family use to undergo due to my self hurting.I was anyways suffering physically and mentally,but my whole family that included my parents side and my in-laws were shaken up and were unable to perform the act of normalcy in their respective fields.My behaviour was very upsetting to them as they felt helpless in seeing their efforts going in vane.

In 2011 even GOD felt pity for my pain and my family sufferings and let a miracle happen in the disguise of my own willingness to fight my own mind and radiated me with strengths unlimited.My strength gave me the willpower to quit medicines and tackle my mind rationally.It wasn’t easy at all the first few months as I encountered memory blocks and had become like a new born baby.Basic chores like driving,cooking,being social and computer networking were a task to me in which I had to recheck again and again with my loved ones.I was confused between which was the actual me,the one that lived because of medicines or the one which is living without medicines.As time has it’s own ways of unfolding mysteries I was contented with the new me.My scars,some visible and some hidden had an option to undergo surgery and disappear,but I choose to keep them to remind me never to fall prey to my past mind.